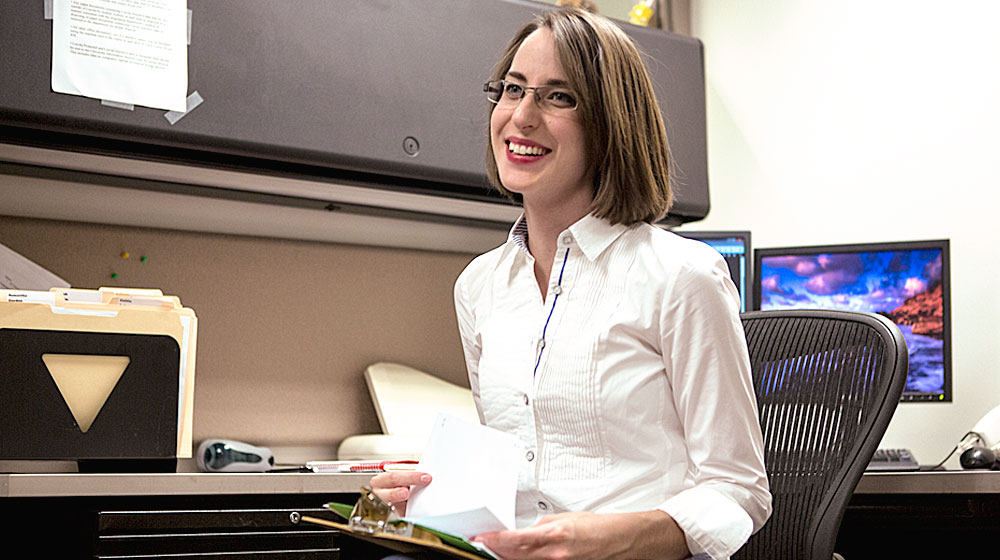 Rebecca Witheridge, an active member of the Illinois Chapter and a student presenter at the 2014 IASWG International Symposium in Calgary, just received the prestigious President's Medallion at Loyola University Chicago. Below is an excerpt of an interview with Rebecca on the occasion of her recognition:

"Rebecca Witheridge is serious about school and service.

As a graduate student, Witheridge carries a perfect 4.0 GPA and leads tutoring sessions for her fellow classmates. She’s also traveled to Canada to make a presentation at an international symposium for social workers. And outside of her busy school schedule, she works with young people at the Mercy Home for Boys and Girls.

Here, she talks about all the Loyola professors who inspire her, how graduate students can manage a heavy course load, and why she loves working so much with at-risk children.

My favorite memory has absolutely been presenting at the International Association for Social Work with Groups (IASWG) symposium in Calgary, Canada. It was an honor to represent Loyola alongside a group of such talented and dedicated peers and faculty. As fledgling social workers, having our work seen, discussed, and validated by such prominent figures as Dominique Moyse Steinberg and Andrew Malekoff (whose work we have read in class) was truly inspiring.

Talk a little about a professor or mentor who inspired you.

It is impossible to choose just one professor. I have admired Christie Mason’s sharp intellect, Shirley Simon’s avid devotion, Priscila Freire’s grit and guidance, Kathy Lyndes’s passionate curiosity, Ivan Medina’s wellspring of hope, Michael Lloyd’s sense of humor, and more. I was profoundly fortunate to witness Lynn Boyle’s heartfelt embodiment of the values of the social work profession. She is dearly missed by the Loyola community.

Tell us about your volunteer/service work and what it means to you.

I’m interning at Mercy Home for Boys and Girls, a residential facility for adolescents who suffer from behavioral problems and complex trauma. I feel so privileged to have the opportunity to build relationships with these smart, resilient, and challenging youth. I know that I will be a better social worker for having known them; I am striving to repay them with the best therapeutic support I can muster.

Any advice you would give students about how to get the most out of their education?

Be invested in your own learning. Graduate school is a battle some days, and it is impossible to do everything perfectly all of the time—but it is important to do the readings, show up for class, and take it seriously. Prioritize, organize, and do stuff early when you can. Explore the topics that get you fired up. And call a friend when it all seems like too much!" 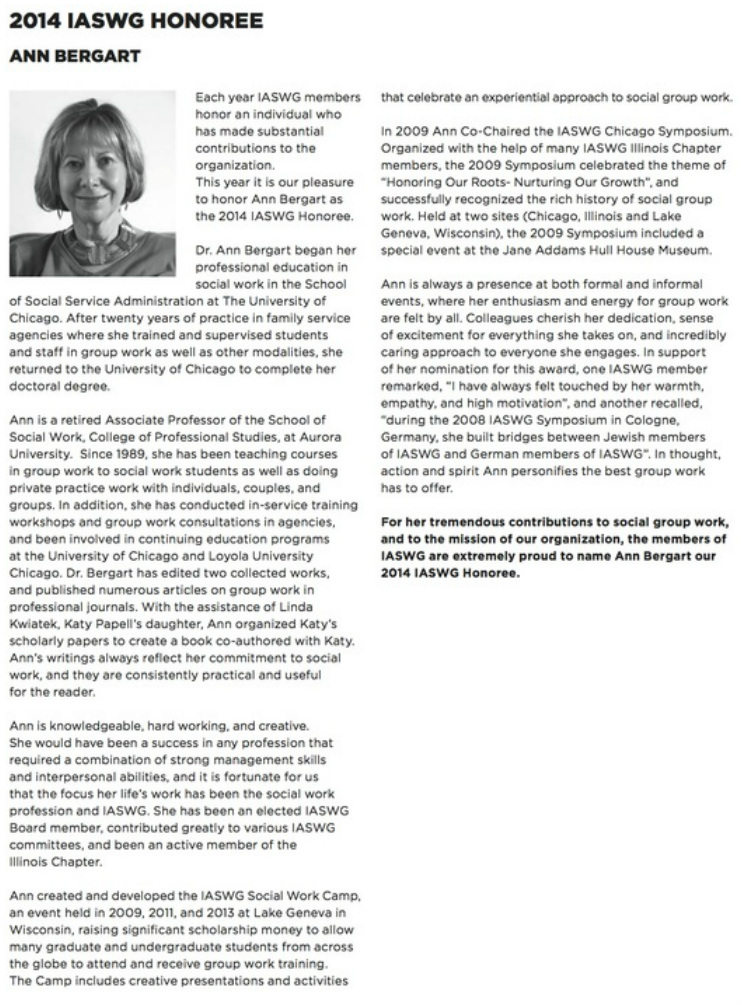 Remarks from Ann Bergart on the occasion of her IASWG honoring:

"Thank you from deep in my heart.  I can’t imagine an honor that I would cherish more than this one.

Greg mentioned that lucky day that I found IASWG (it was AASWG).  I just want to say a little bit about what this organization has meant for me, if I can steady my voice.  What drew me at that event really was what Greg said.  It was finding a group of like-minded people who had a passion for group work.  I felt I belonged, and that really was a very special kind of feeling.  I thought it would be in a professional sense at that time.  But what’s happened over the years is that this organization has become a huge part of an extended family for me.

Many years ago, at the age of two, I came to this country as an immigrant.  My parents had fled Hitler and both had lost most of their family.  I was meant to be in a big family –  I just am that kind of person.  I’ve adopted a number of big families over the years – my friends’ families.  It’s not quite the same.  But I’ll tell you that being part of this organization – and feeling the sense of deep belonging, love, and respect that I feel toward other people – has  filled a place in my life almost in a way that nothing else has filled.  I should explain that I wasn’t able to have children, so I don’t have the kind of nuclear family that I think would have helped with that.  But OK – you kind of deal with the cards that you’re dealt, and I can’t believe how lucky I was that I got connected with you!

IASWG has done something incredible for me because it’s given me an opportunity to be myself within a family, an extended family – a supportive one and a stimulating one, – and opportunities to try out all kind of ideas, and support for trying things out.  So in the process I have discovered things about myself that I didn’t know were there, and I have met challenges I didn’t invite but that came –  like raising money for the symposium.  I’m not good at that, but I’ve even developed a little bit of ability to do it.  I never would have done it before, but I wanted to do it for my family!

So I really believe that this is a unique organization.  You have given me far, far more than I could ever give back.  I am so grateful to be given this honor because I love and respect you, and there can’t be a more wonderful honor than to be honored by people you love and respect.  Thank you.  This is one of the highlights of my life. . ."

The Illinois Chapter is proud to announce that two of our members, Brandon Haydon and Natalie A. Hock, were recognized as Emerging Leaders at the 2014 IASWG Symposium. Below are portions of their nominating letters, written by Shirley Simon, as well as a brief video showcasing their enthusiasm for IASWG and the symposium experience.  Kuddos to these up-and-coming group workers!

" Brandon Haydon is the type of student an instructor hopes for. He is attentive, responsible, thoughtful and enthusiastic.  He reflects on the material at hand, makes thoughtful connections and stimulates his peers to participate at a much higher level.  It is rare to find a student who is intellectually gifted, personally engaging, and sensitive to the needs of others.  Brandon Haydon is all three. Moreover, Brandon has developed a strong commitment to group work.  Together with Natalie Hock, he developed a poster presentation for the IASWG Symposium in Boston last June on North America's First Nations People: Repairing Historical Trauma Through Culturally Competent Group Interventions, and is presenting a workshop with Natalie and Sarah Burnette on Exploring the Benefits of Groupwork with Clients Who Identify as Non-monogamous, Polyamorous, or as Members of an Open Relationship: Intimate Relationship Constellations as Groups at this year's Symposium in Calgary.  In addition, he is active in Illinois chapter activities and consistently encourages other students to become involved. Brandon brings a mature, humble, and  responsible perspective to all aspects of his professional work.  He is committed to his own professional development and competency as a social worker, identifies as a group worker, and foresees pursuing a PhD in social work in the coming years."

"Natalie Hock is a mature, energetic, and engaging young woman who motivates those around her to get involved and make a difference.  She is a "natural born leader". Her consistently high caliber academic work, and her commitment to her own professional development are remarkable. Natalie has been instrumental in facilitating joint programs between the Illinois Chapter of IASWG and the Student Association of Loyola University Chicago.
She exemplifies the characteristics of an effective group worker and readily assumes leadership positions. She recently organized and secured funding for a group of twelve Loyola MSW students to attend the upcoming NASW conference in Washington.  This June, Natalie will be attending and presenting at her second IASWG Symposium, making both paper and workshop presentations. Natalie will be presenting a paper on Implementing Blended Task and Support Groups into the Client Service Plan of a Social Service Agency. Together with Brandon Haydon and Sarah Burnette, Natalie will be conducting a workshop on Exploring the Benefits of Groupwork with Clients Who Identify as Non-monogamous, Polyamorous, or as Members of an Open Relationship: Intimate Relationship Constellations as Groups. At the Symposium in 2013, Natalie presented a poster presentation with Brandon on North America's First Nations People: Repairing Historical Trauma Through Culturally Competent Group Interventions."